These are all words that we’ve recently heard used to describe police officers… our police officers. Oversimplified, generalized, negative labels for the brave men and women that have taken an oath to serve and protect our communities – to protect you and me, regardless of skin color, place of residence, or any other difference that we construct.

Stereotypes. They’re divisive, harmful, and perpetuate ignorance. They put people into categories of “us and them” – or, more accurately, “us versus them.” Categories we use to differentiate and deride one another. Thankfully, we don’t tolerate stereotypes in our contemporary society. We especially do not tolerate them when used about people of other religions or ethnicities, nor should we tolerate them regarding vocations, e.g. law enforcement officers.

The last two or three years has been troublesome for police-community relations, especially those in our black communities and their local police departments. Sparked by multiple officer involved shootings of black men, we’ve seen nationwide reactions that have included well-organized community activism and peaceful protests. Recently we’ve witnessed demonstrations during the national anthem, along

with hashtag activism across social media that has encouraged dialogue and motivated change. Sadly, we’ve also seen full-blown riots and terrible acts of violence in many of our urban locations. All of these incidents convey a message loud and clear – something is not right. Right, wrong, or indifferent, something is clearly not right with our relationships with our fellow man.

Surveys reveal that a majority of people feel that race relations are the worst they’ve ever been in the United States. A palpable tension exists between whites and blacks, police officers and black communities, and those that support either side. It seems that a line has been drawn in the sand – a line divided by race. It feels like, maybe by distortion from the media or potentially by political partisan influence, we are forced to choose a side. It feels as if you’re either for the police or you’re against the police. Some will say that they are pro-police and against police brutality while supporting our brothers and sisters in the black community (sentiments that I echo), but it certainly doesn’t feel like that is an acceptable option or opinion to hold in today’s environment.

So what do the surveys reveal? What are the activists revealing? What have the rioters revealed? They all reveal that something is not right with our relations with one. They reveal that we aren’t treating each other as fellow human beings. They reveal that there is a divide and that reconciliation is desperately needed.

I do not have all of the answers. However, I do want to be a part of the solution instead of being a part of the problem. I want to be an agent for reconciliation between police departments and our communities, between our white citizens and our black citizens – to be an agent for reconciliation for all of God’s children regardless of any category that we place ourselves into.

“You should treat people the same way that you want people to treat you.” – Jesus

The men and women who put on the badge are mothers and fathers, daughters and sons, sisters and brothers, friends and members of our community. They have a mortgage to pay and a car to repair. They look forward to football games, vacations, and watching a good movie with their spouse. They are trying to get their kid’s homework done and making sure that they’re eating all of their vegetables. They are loved by their friends and families just like the rest of us. They are children of God, made in His image, just like the rest of us.

It is my hope and prayer that we can convince ourselves to move beyond the sensational news entertainment cycle, the inflammatory social media posts, and derogatory internet memes that disparage law enforcement. Let us instead evaluate these incidents on a case-by-case basis. Let’s avoid overgeneralized, stereotypical statements about our police officers and instead treat them with the dignity and humanity that they deserve. 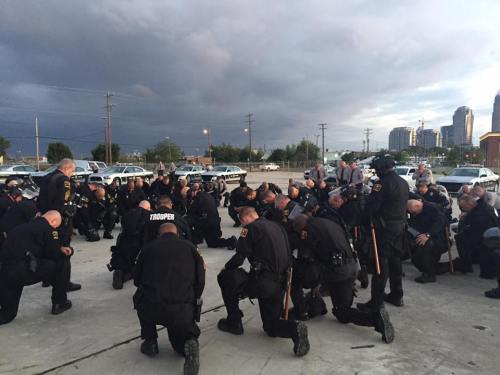 Two photos have emerged from this past week’s unrest in Charlotte that I found particularly moving as they do a phenomenal job of reminding us about the humanity behind the uniform and badge. The first photo shows a group of North Carolina State Troopers kneeling for a time of fellowship and prayer before beginning their duties on the streets that evening. The second photo shows a black man, Ken Nwadike, hugging a white police officer during a protest.[1] Both of these images remind all of us that the police are people, too – they worship just like us, and they feel and love just like us. They are human, they are God’s children, too.

Nwadike says about the police officer, “I see him as a human being, just like I see everyone as a human being. This uniform doesn’t make him a robot, just like your uniform, your skin color, doesn’t make you a criminal. That’s what I need people to understand. This man [police officer] gave me a hug, and he [another protestor] wants to fight me because of that. How does that make sense, spreading more hate in the world? That’s what’s frustrating me!”

It seems that over the past few years, with the exception of about 24 hours when five Dallas police officers were murdered, police have been stereotyped as acting like Stormtroopers from Star Wars – mindlessly and unapologetically ravaging our neighborhoods, killing those that are different at will. If we want reconciliation to occur, part of that process has to include recognizing the dignity and humanity in the men and women that serve as police officers. Not only do we need to hold those accountable that commit crimes while wearing the uniform but we also need to treat the good police officers with the same level of respect and dignity that we’d ourselves expect to be treated with – that expectation isn’t with negative stereotypes, but rather with love. “You should treat people the same way that you want people to treat you.”

[1] You can watch the nearly ten minute video here of Nwadike hugging police officers and engaging with passionate protestors who disagree with him. Warning harsh language.